The nation's first switch locomotive powered by a fuel cell holds promise for both enhancing energy security at military bases, and providing an emergency power supply during disaster response.  The locomotive results from a public-private partnership involving the Engineer Research and Development Center (ERDC), BNSF Railway Co., and Vehicle Projects Inc.  The public had a first glimpse of the vehicle at a recent commissioning event in Topeka, Kan. 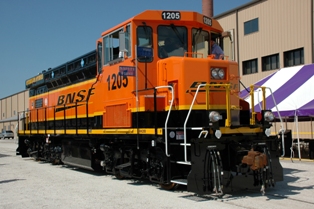 Hydrogen-powered fuel cells are an emerging technology and have the potential to replace diesel propulsion onboard locomotives, said Melanie Johnson, research project manager at the Construction Engineering Research Laboratory (CERL).  Fuel cells are quiet, non-polluting, and more efficient than diesel engines.  These characteristics are all significant advantages for locomotives.

The switcher's fuel cell is the proton exchange membrane type, which operates at much lower temperatures than large, stationary fuel cells such as the phosphoric acid type.  Its almost-zero carbon dioxide emissions also make the technology attractive for addressing climate change.

The locomotive's developer, Vehicle Projects, Inc., built the world's first fuel-cell locomotive in 2002 for use in underground mines to replace noisy, polluting diesel engines or complex electrical systems.  Funding for the much larger switch locomotive came from the Department of Defense through the Defense Logistics Agency and the BNSF Railway Company, with the defense focus to be on energy security at installations and for emergency/contingency operations. 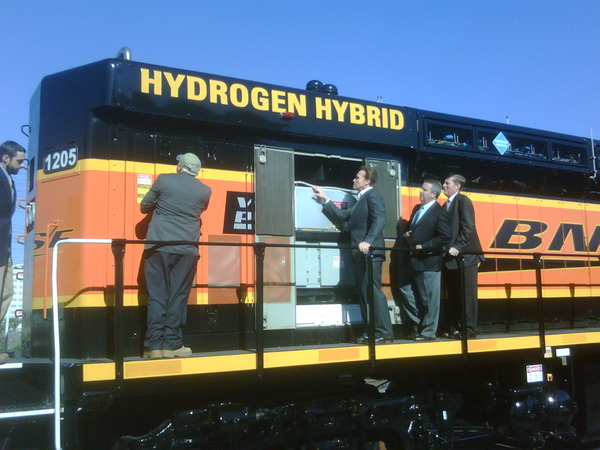 According to Vehicle Products president Dr. Arnold Miller, If a base were to lose its main power supply, you could provide basic electricity to the base with just one fuel cell powered locomotive.  Most installations already have at least one track with a switcher for moving cars around the base.

For emergency relief, Miller said that railroad track is rugged and flat, so it typically does not sustain the same damage as other infrastructure during natural disasters.  Even if it has some damage, it can usually be repaired quickly, he said.

After Hurricane Katrina, for example, a diesel locomotive was mobilized to provide air-conditioning and other utilities for a makeshift jail erected to deal with the spike in crime.

The transportation industry has been experimenting with fuel cell powered vehicles since the mid-1960s.  While great progress has been made, there are still major obstacles to widespread use of these vehicles, including their current cost and the lack of a hydrogen refueling infrastructure.  Some states are beginning to build refueling stations along their roadways, such as the California Hydrogen Highway initiative.  However, it will be many years before the nation could fully support a hydrogen-based vehicular network.

In contrast, trains powered by fuel cells could have refueling facilities at the stations.  We would favor using wind energy to power small plants that could produce hydrogen by processes such as electrolyzing water, Miller said.  Wind turbines could be placed along the railroad's right-of-way.

Rail is the most fuel-efficient mode of surface transportation, moving a ton of freight more than 436 miles on a single gallon of diesel fuel, according to data from BNSF, a subsidiary of Burlington Northern Santa Fe Corp.

After its commissioning in Topeka, the fuel cell switcher is now being tested at the Transportation Technology Center, Inc., in Pueblo, Colo.  Following that, it will be moved to Los Angeles where it will serve two different rail yards for several months.  Once the prototype proves successful, the plan is to demonstrate its backup generation capability at a military installation.